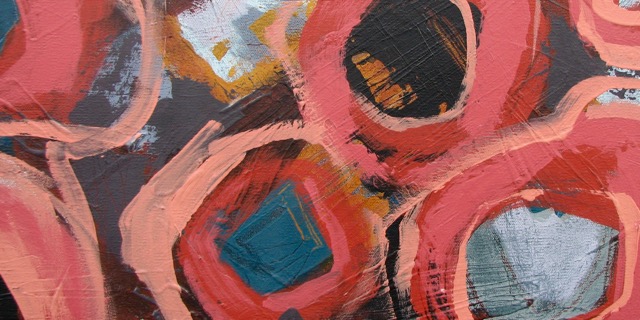 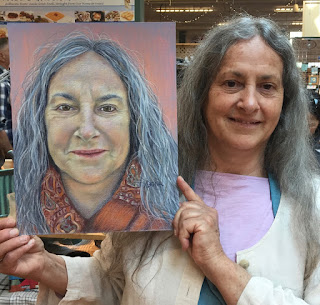 Jacquie with her portrait 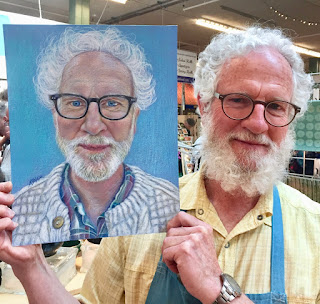 John with his portrait

Jacquie and John agreed to pose with their portraits so I could snap a few photos. John commented that the reference photo used to create his portrait was taken when his beard was 'a bit more groomed' than it is now... 5 months later.

Next time you are at the 'The Old Strathcona Market' here in Edmonton stop by their pottery booth Aven-Hill Pottery and say hi! 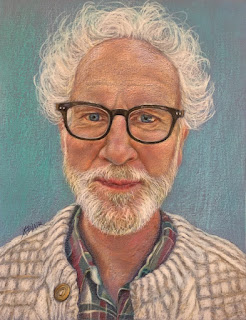 John is the other half of the creative talent for Aven-Hill Pottery (this is a link to their blog).  In 1984, right after graduating from the Alberta College of Art and Design, he and his wife Jacquie started their pottery business, which means they have been creating pottery for 35 years!

You will find them at their booth inside the Old Strathcona Farmers' Market every Saturday. Next time you're at the market you might want to stop by their booth to see the exquisite range of colours they use for glazing their pieces.

Looks like someone recognizes another one of their humans...
:0) 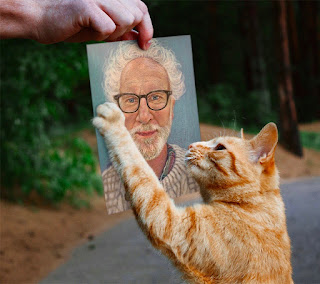 A special note to my subscribers:

*If you received this blog post via email subscription the video will not be visible in your email. Please go directly to my art blog by clicking on the following link for kimblairartist.blogspot.com in order to view the short 2 minute video of the creation of this portrait.

(It may take a couple of seconds for it to load once you press play...) 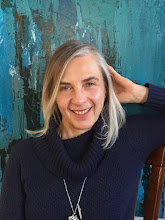 After you enter your email address in the 'subscribe' box above, you will receive a verification email in your in-box. (You must click on the highlighted link in that email to activate your subscription.)
*Your email address will not be shared

Kim Blair
Edmonton, Alberta, Canada
Thick buttery paint brushed onto a finely woven canvas surface... swirled and blended into soft peaks and valleys with a hint of ground cover peeking through here and there... dollops of rich color applied with a palette knife, twig, or brush creating texture for the eye and hand to appreciate... and the heart to enjoy.

The beauty in imperfection...

The Easy way to purchase my art is via :

How to purchase a painting:

I offer PayPal as a payment option.
*Any painting without a paypal button please contact me and I will send you a paypal invoice.
(You may use a credit card on Paypal)
*S/H will be added to paintings mailed anywhere in North America
(*If you are able to pickup your purchase at my studio please email me before you purchase and I will send you a new invoice minus the S/H fee)
*For USA and international shipping costs... please contact me.
mailto:kimlmt@telusplanet.net
All prices are in Canadian Funds

Although I take great care in trying to make sure that the colours of each painting on my blog are accurate there may be some variations due to camera/computer settings.

Please note that I, Kim Blair, hold the copyrights for all art work created by me. Any of my art, including what is posted on this blog and/or on my website, is not to be reproduced in any form without my personal written permission. This includes, but is not limited to reproductions in any form.
You may contact me via my email.